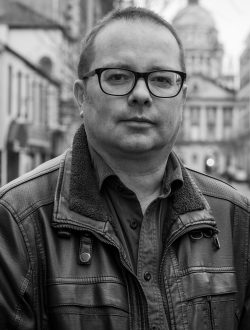 Chris Lindsay’s career in journalism spans more than 25 years. Starting out on his local paper in County Antrim, Northern Ireland, he went on to freelance for the Belfast Telegraph and The Mirror before becoming News Editor at City Beat Radio. He has been a staff journalist with the BBC since 1999, and spent more than a decade as a producer on the Network Bureau based in Belfast, covering stories from across Northern Ireland and the Republic of Ireland for UK and global outlets including the Today programme, PM, The Six and Ten O’Clock News, and the World Service. He has also worked as a senior broadcast journalist for BBC Northern Ireland’s TV News, Politics and Radio Current Affairs departments. He delivers lectures to journalism students at BA and Masters level on how to report from public order situations.