Finding the voice: The Boy With A Bamboo Heart 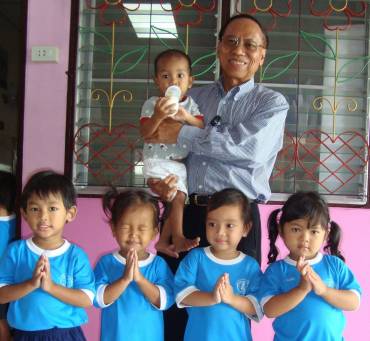 “Your story is solid, but it needs to be written in the first person.”

We had not even started the four-day writing retreat in Hua Hin Thailand, and already the workshop leader had determined that the two years I had spent researching, writing and editing my manuscript were for naught. I rebelled against the idea, yet her words rang incessantly in my head in the manner of a bad jingle.

I decided to rid myself of the growing doubt. Once I returned to Philadelphia, I presented a rough draft of my opening chapter in the first person to my critique group. I told myself that they would confirm that my third person version was superior. It was not. They unanimously declared that Dr. Amporn’s story, told in his own voice rather than the narrator’s, was far more powerful.

Bamboo Heart Fordec Visit March 6, 2010 CJauvinI was at the beginning again. The telling of this story had not been planned. It was a matter of synchronicity. On March 6, 2010, while on a trip to Thailand, my fiancé took me to visit the five children he had been sponsoring through a local charity — FORDEC.

On that day, Yok, an 8-year-old girl, magnetized me with her enthusiasm for life. She, along with her classmates, gave us a tour around the slum area (photo left) surrounding the school and proudly pointed to their homes. Yok did not see what I saw. Shacks constructed of wood scraps and blue tarps barely standing on mounds of putrid garbage. When we returned to the school, Dr. Amporn invited us to lunch. While we ate green chicken curry, we listened to him recount his harrowing journey from street orphan to founder of FORDEC. By the time the mango sticky rice arrived for dessert, he asked me to write his story.

That was the first beginning. Although he thought that my credentials as an international corporate attorney qualified me for this task, I knew I was undertaking a journey into unchartered territory. Creative writing is to contract writing what practicing scales is to composing a symphony. One has nothing to do with the other. For the next two years, while I learned the craft of writing, I interviewed Dr. Amporn in person, via Skype and traveled up-country to see his village albeit six decades later. No photos existed from his childhood or young adult years. There was no correspondence. In essence, all I had were the interviews.

I realized that before I could write his story, I would need to learn to listen in layers. During my legal career, I had discovered that the first round of negotiations focused on understanding the parties, the context and the stakes. I applied this technique.

I questioned Dr. Amporn systematically about each phase of his life. Fortunately, he possessed an incredible memory. I scoured the Internet to check his account of people and places. I was amazed by the accuracy of his recollection. When it came to events, I had to rely entirely on his personal account. At first, this unsettled me. The attorney in me wanted to verify every detail. In time, I realized I would simply have to trust him.

Then came the second beginning. The most difficult challenge of rewriting the story in the first person was to find Dr. Amporn’s voice. I had to leave behind my prism of an educated woman reared in Canada with French as a mother tongue. I had to acquire the skin of an orphan who begged for his food, carried and used a rifle as a boy soldier, took the vows of a monk and dedicated himself to social work. Our two experiences were not only worlds apart, they were diametrically opposed.

My first step was to listen to all our interviews again. I jotted new information in the margins of my original notes that I had not previously heard, such as the longing for his mother and his need to belong. I paid attention when his voice faltered, he became silent or made off-handed comments.

The listening anew also unearthed what I had previously missed. We had skipped over a two-year period. He had never explained the nature of the injury to his right hand. His two attempts at suicide seemed out of character. Aware of these gaps, I interviewed him again, threading gently. He then revealed his most shameful secret. He had been a boy soldier in Cambodia during the Indochina war.

Writing the jungle chapters was the most trying of all. I did not want to be tainted by modern depictions yet I could find no way to relate to these experiences. I returned to the new recordings. Working without further input, I wrote several scenes. I sent him the chapters. The silence that followed was unnerving. I moved on with the writing. On my subsequent trip to Thailand, I brought a copy of A Long Way Gone: Memoirs of a Boy Soldier by Ismael Beah. Dr. Amporn held the book in his hands for a long time and then nodded his approval.

The most useful tool for writing The Boy with a Bamboo Heart was visualization. Routinely, before I would begin a new section, I would look at photos of Dr. Amporn, images of Thailand and listen to the interviews. I would close my eyes and imagine the scene over and over until it felt familiar to me. Then I would begin to write.

Dr. Amporn graciously reviewed every draft. In hindsight, I realize that the first version of the story was meant to prepare us both for the final version. We both needed this process to find the voice in which this story needed to be told.