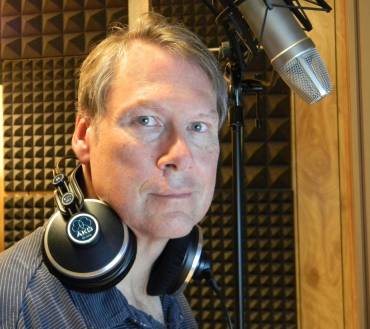 Paul Heitsch is an audiobook narrator, educator and audio production professional. His studio is located in the serene Shenandoah Valley region of Virginia in the USA. It is from here that he narrated Follow Me: Leading From The Front by Kim Kristensen. The audiobook of Follow Me will be released in May by Blackstone Audio. Our eBook version is available now here. Earlier this week, Paul talked about his experience narrating Kim Kristensen’s work:

I was contacted by Blackstone Audio, an audiobook production and publication house in Ashland, OR, and asked to audition. Their Casting Director liked my read and offered me the book.

Did you have any specific routine/process for narrating Follow Me?

My routine for narrating audiobooks begins with reading the book cover to cover. Without knowing the entire book, its arc, its tone, tempo, themes, I can’t really hope to capture the author’s intent, or do justice to the story. For fiction this is particularly important; I don’t want to be tripped up by a revelation, on page 286, that one of the characters has a distinctive voice or accent that I had neglected to portray. In non-fiction, there are fewer surprises, but I still want to be as familiar with the material as I can be before I begin recording.

During the pre-read, I’ll flag anything that needs research or clarification. I was helped enormously with this on Follow Me by Jesse Bickford, the Studio Director at Blackstone, who stayed up late to talk on the phone with Kim Kristensen, who was kind enough to record the Danish pronunciation of many of the names found in the book.

Once prep is done, it’s a straightforward process of recording the raw audio, submitting the recordings to Blackstone’s proofing and editing team, and then re-recording any misreads they find. Blackstone takes care of the rest of the post-production chores

How did you capture Kim Kristensen’s voice?

As described above, I read the book. Every author has a distinctive narrative voice, and my job as a narrator is to find that voice in the text. Mr Kristensen has a very natural narrative voice that lends itself well to being read aloud. He is also very committed to his ideas and values, and his descriptions of the experiences which formed them are vivid and deeply affecting. For non-fiction, the challenge is to evoke the same enthusiasm and dedication the author has for their subject in my performance, and Mr Kristensen’s writing made that very easy.

What were some of your favourite leadership lessons you’ve taken from the book?

I connected very strongly with his main precept of leading from the front. Of how effective leadership always rests on the example the leader sets of being willing to do whatever his or her team is asked to do. His direction to assemble a dream team, and to train the team members to at least two levels beyond their position, also resonated with me.

How was narrating Follow Me different from other projects you’ve worked on?

Well, this was my first Danish author, for one thing. The translator did an excellent job, but some of the flavor of the original language was still present in the manuscript I received. This was also my first book about leadership principles, and it augmented, and strengthened, my previous training in department, personnel, and project management roles.

Last one, what do you love about narrating audiobooks?

Oh, boy, pretty much everything. I love the challenge of finding the author’s truth in every story, of giving life to the author’s ideas, and to characters whose actions, thoughts, feelings, motives, had, previously, only existed on paper. I love being able to play all the characters, man and women, from the leads to the walk-ons.

I love the autonomy. Once I am given the green light to record a book, I become my own director, and all the decisions on every aspect of how to perform the book, (with rare exceptions), are mine alone. I find that wonderfully liberating and fulfilling. I enjoy the independence of being a free-lance narrator – I can set my own schedule, and, yes, work in my pajamas if I want to. Flannels are particularly good, as are cotton sweats, for recording – they don’t rustle at all.

And I love being part of the audiobook community. For people who spend a good part of their day sitting in a small, sound-proof, padded room, narrators are an amazingly collegial group, and, as you’d expect, very well-read.

To find out more about Paul and his wonderful work you can find his website here.