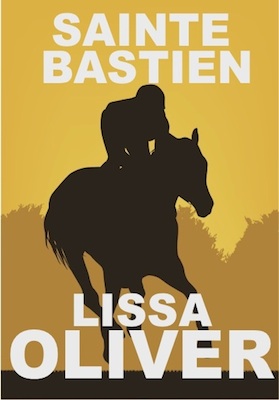 I’ve heard it said that an author should write the book that’s missing from their bookshelf. While it’s sound advice, I couldn’t imagine doing otherwise. In my day job as a horseracing journalist I only write the features that I would like to read and when it comes to my first love, writing novels, it really is pure self-indulgence.

My passion for writing came as soon as I could hold a pen and form a letter, and my passion for racehorses a few years later, so I’m at my happiest combining the two. Chantilly Dawns really was the book I most wanted to write – it didn’t follow the usual trend of a racing thriller, but instead offered me an opportunity to really explore, and abuse, my protagonist’s psyche. It was written for myself, but thankfully quite a few others share my tastes!

Although I set my books within the horseracing world that I know and love, I try to be aware that they should appeal to non-horse people and I take care not to be technical or use jargon. But the self-contained bubble that is the racing world does present me with an excellent base on which to build a story and really test a character.

Gala Day may be a typical horseracing thriller, but again it was the book I most wanted to read. I’d grown up with the Dick Francis thrillers and their imitators, but I always found them detached from the real, ground roots stable in which most of the industry work. I didn’t like the oh-so-perfect heroes, who described pain and discomfort as ‘boring’! I wanted an ordinary hero who felt pain like any of us and felt fear, too, but was prepared to fight for his reputation, simply because he had to.

Right now I’m working hard on a third horseracing thriller, which could be described as a combination of the two books. I enjoyed the fast-paced whodunit aspect of Gala Day, so that is certainly the main premise of my current novel in progress, but I also enjoyed my sadistic role as an author in prising out and preying upon the hero’s weaknesses in Chantilly Dawns. Currently I have two central characters, the hero and the villain, both with their own set of emotional problems. The plot revolves around their tortured relationship and its repercussions. Once again, the racing world is merely a backdrop.

I find when I’m writing a novel that the first three or four chapters are the most difficult and take far too long to write. But they are the crucial foundations of a story, establishing characters and plot. As soon as I’m comfortable with them, the remainder simply flows, rather like following the characters visually and recording their actions. From that point on, despite only writing in my spare time (it’s surprising where you can conjure it up from!) I tend to write non-stop and so far have completed each of my three published novels in nine months; not counting those first long and laboured months or even years of getting past chapter three. As I’m approaching the halfway point of thriller number three, it’s safe to say: Watch This Space!