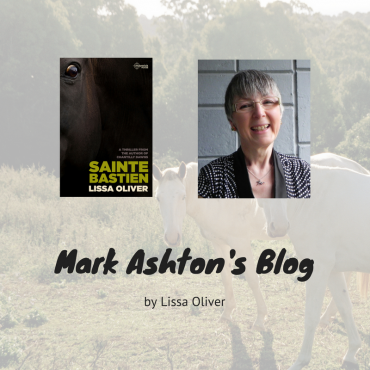 My publisher, among others, requested a blog, but as I do very little of interest other than create stories and characters, I thought those characters were in a better position to write an interesting blog! So my first port of call was to Mark Ashton, retired jockey and the first person the reader is introduced to in my latest novel, Sainte Bastien.

I know I had a bit of an embarrassing blip, but on the whole retirement’s good. More time to spend with the wife and kids. That puppy I’d always promised them. And I’ve been getting a load done round the house. Yeah, life’s pretty good. It’s not what I would’ve wanted, no one plans to retire at 30. As a jockey, you know it’s coming. 45 or 50 tops, if injury doesn’t get you first. So it’s a bit of a kick in the guts this soon, ’specially as Kym’s a good five years older than me. He’s my replacement. Seeing him with my job, that sucks, I can tell you.

I miss it, of course. That rush. That adrenalin kick. Unless you’ve experienced it, you’ve no idea the rush you get, riding a racehorse at 45 miles an hour. Nothing compares. Not pissing about on ponies. Not even doing half-speeds on racehorses on the gallops of a morning. That’s all I’m allowed since my back went. Shoved up on the quieter ones, out of sympathy, while everyone else gets to notch it up a gear on the good ones. It hurts, I don’t mind saying. And it’s not my back I’m talking about.

But, really, life’s good right now. Just hanging out with Kerry and the kids. I missed out on that, riding. You’d be out on the gallops by seven in the morning and not home from the races ’til seven at the earliest, in bed by ten, seven days a week. So I’m just making the most of it now, chilling out a bit ’til I find my feet.