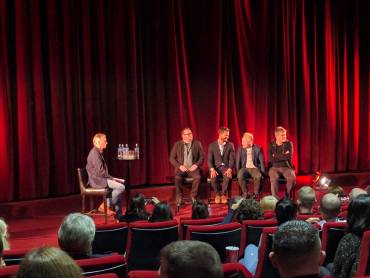 In the wake of the long awaited premiere of The Siege of Jadotville this morning, director Richie Smyth and leading actor Jamie Dornan joined Ryan Tubridy on RTE Radio 1 to discuss last night’s occasion.

Smyth and Dornan give us a great deal of insight into the process of making Jadotville in the twenty minute extract. The clip covers more practical elements such as putting together a soundtrack to their emotional anecdote of the 300 South African extras on the project, some of whom welled up with tears when learning of the significance of the events 55 years ago on which the film is based.

Reviewing last night’s success, the three of them are unanimous in agreement that “you don’t really get a better screening than that.”  Hitting the nail on the head with accuracy, Smyth explains that “It’s like the whole country in some way had a connection with it” when remarking on the electric atmosphere in the film theatre.

The discussion touches upon various stages in the process of the film’s production, Smyth telling the story of how the project first came into being.  He also refers to Dornan’s casting and connection to Quinlan’s character – both of them having what Smyth calls “the Steve McQueen factor.”

Dornan fans and film buffs alike will be interested to hear of Dornan’s research process for Quinlan’s character and his struggle with the famously difficult-to-master Kerry accent, which raises interesting points about the universality of the film and the question of how authentic to make a historical reconstruction.