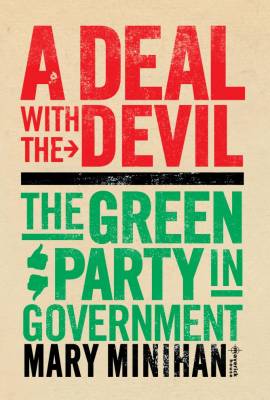 A Deal With The Devil

The Green Party in Government

The Green Party struck its “deal with the devil” by entering coalition with Fianna Fáil in 2007.

The junior partner secured control of the Environment and Energy ministries, irritating some in the larger party with its pursuit of a ban on stag hunting, the introduction of civil partnerships for same-sex couples and restrictions on planning.

An unprecedented crisis in the State’s finances, with an exposure of the deeply flawed Irish banking system, shook the party’s grassroots and its vote collapsed in the local and European elections in June 2009. The following October, party members threatened to pull out of Government over the controversial National Asset Management Agency (Nama), while senior figures were kept in the dark about the arrival of the IMF in 2010. The Greens dropped a bombshell late that year, demanding a date for an early general election, but stayed in Government in the hope of passing key Green legislation.

Controversy over revelations about then Taoiseach Brian Cowen’s contacts with Sean Fitzpatrick while he was still Anglo chairman strained relationships further. A bungled reshuffle was aborted at the behest of the Greens, and the “momentous” decision to pull the plug on the Coalition was taken in January 2011. But their three-and-a-half year period in Government cost them dearly at the polls.