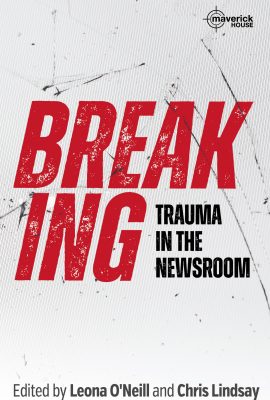 Trauma in the Newsroom

By Chris Lindsay with Leona O’Neill

Breaking: Trauma in the Newsroom is a collection of stark, brutal and courageous stories written by some of Ireland and Britain’s most renowned journalists, camera men and broadcasters. They write about how their careers impacted their mental health, left some with PTSD, others anxiety and depression – and even made some walk away from their hard-fought for dream jobs after being worn down by a conveyor belt of trauma.

Breaking takes the reader from the troubled back streets of Belfast to the carnage of war in Lebanon, from the minefields of Iraq, to a claustrophobic courtroom in Mauritius, to the starving refugee camps of Bangladesh and back around the world again in a collection of raw, powerful and poignant chapters from the frontline of modern journalism.

Chris Lindsay’s career in journalism spans more than 25 years. Starting out on his local paper in County Antrim, Northern Ireland, he went on to freelance for the Belfast Telegraph and The Mirror before becoming News Editor at City Beat Radio. He has been a staff journalist with the BBC since 1999, and spent more than a decade as a producer on the Network Bureau based in Belfast, covering stories from across Northern Ireland and the Republic of Ireland for UK and global outlets including the Today programme, PM, The Six and Ten O’Clock News, and the World Service. He has also worked as a senior broadcast journalist for BBC Northern Ireland’s TV News, Politics and Radio Current Affairs departments. He delivers lectures to journalism students at BA and Masters level on how to report from public order situations.

Leona O’Neill has been a journalist for 24 years. She has been a news reporter for the Belfast Telegraph and others across Northern Ireland, a broadcast journalist, and a magazine editor. She writes a weekly column in the Irish News and is Northern Ireland Field Producer for Vice News, Al Jazeera, CBC News, ABC Australia and PBS Newshour. She is currently a Lecturer in Journalism at Ulster University. She is an avid campaigner for journalism safety and better mental health in newsrooms and regularly speaks on the issue in conferences across the world.