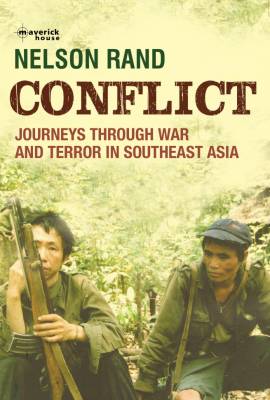 Journeys through war and terror in Southeast Asia

Nelson Rand is an intrepid adventurer. Despite the warnings and threats against his life, he journeyed into the most dangerous parts of Southeast Asia to witness the plight of the oppressed.

He hiked through the jungles of Laos to interview Hmong guerillas, the remnants of the rebel army that refused to surrender to the communist government.

In Vietnam, he ventured into the central highlands to document the civil rights abuses suffered by the Montagard people, persecuted by the communist government because they fought alongside American forces in the Vietnam War.

He saw action in Burma where he joined forces with the Karen National Liberation Army and accompanied the insurgents as they mounted full scale attacks on Junta forces.

Rand describes the Karen’s plight as one of the worst humanitarian disasters of our time. He documented cases of rape, killings, torture and the forced relocation of Karen villages. His audacious journey also took him to southern Thailand in search of Islamic extremists, who have turned the region into a war zone. While travelling in Cambodia, he accompanied government soldiers on their final offensive against the Khmer Rouge.

Conflict is a highly informative, but sobering portrait of Southeast Asia and its secret conflicts.