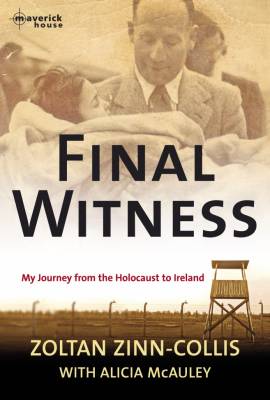 Memoirs of a Holocaust Survivor

By Zoltan Zinn-Collis with Alicia McAuley

At the age of five, Zoltan Zinn was torn from his home in Slovakia and cast into the deepest horrors of Nazi madness.

In Bergen-Belsen concentration camp he survived the inhuman brutality of the SS guards, the ravages of near starvation, disease, and squalor. All but one of his family died there, his mother losing her life on the very day the British finally marched into the camp.

Discovered by a Red Cross nurse who described him as ‘an enchanting scrap of humanity’, Zoltan was brought to Ireland and adopted by one of the liberators, Bob Collis, who raised him as his own son on Ireland’s east coast.

Now aged 65, Zoltan is ready to speak. His story is one of deepest pain and greatest joy. Zoltan tells how he lost one family and found another; of how, escaping from the ruins of a broken Europe, he was able to build himself a life– a life he may never have had.