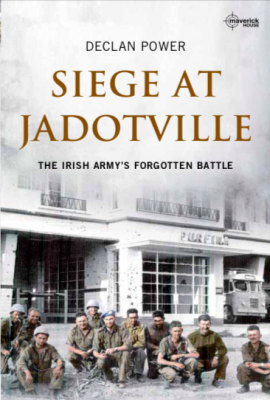 This exclusive edition of Siege at Jadotville: The Irish Army’s Forgotten Battle is limited to 250 copies. Each copy is signed and numbered by the author Declan Power. Pre-order for November.

In June 1961, the men of A Company, 35th Irish Infantry Battalion, arrived in the Congo as part of a United Nations peacekeeping force.

Some of the troops were teenagers, their army-issue hobnail boots still unbroken. Others were experienced soldiers but still unprepared for the fighting that would take place.

Led by Commandant Pat Quinlan, A Company were sent to protect the people of Jadotville, a small mining town in the southern Congolese province of Katanga.

It was here on the morning of September 13, that the sound of automatic gunfire erupted as thousands of Katangan soldiers led by European mercenaries launched an attack on the small contingent of Irish troops.

Outgunned, outnumbered and cut off from supplies and reinforcements, A Company held their ground. This is their story.

“What unfolded over five days in Jadotville is a little-known but astonishing story of heroism and against-all-odds soldiering, a feat of indefatigable courage”

“Jadotville was the Irish Army’s Blackhawk Down — where a handful of surrounded soldiers had to fight tenaciously against a huge enemy force just to survive. Power has written a superb account of a bitter infantry battle”

“In telling the full story for the first time, former soldier Declan Power does the brave men of A Company a great service”