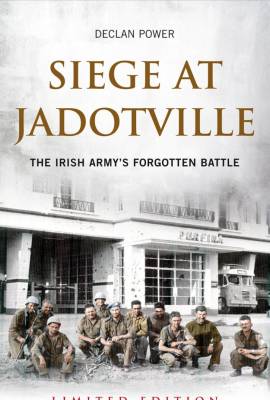 During the course of operations, a company of Irish troops was deployed to protect the inhabitants of the village of Jadotville. Not long after deployment, the troops found themselves heavily out-numbered and engaged in a pitched battle with native Congolese soldiers led by white mercenary officers.

In addition to the overwhelming odds, the Irish also had to contend with being strafed by a jet and had no airpower or anti-aircraft defences to defend themselves. Appeals for re-supply from UN forces were to no avail. There were a number of attempts by Irish troops in the vicinity to mount a relief operation for their surrounded comrades.

However, a mixture of superior fire, physical obstacles and political machinations within the UN led to abject failure. But after numerous rescue attempts failed and the Irish had fought to their last rounds of ammunition and were already using bayonets in hand-to-hand-fighting, Comdt Quinlan decided against the needless bloodshed of his men and surrendered.

Though many of the men fought bravely, some going on to be decorated for valour at later stages, they were made to feel inferior within the army. To have served at Jadotville was something to have been ashamed of.

Siege at Jadotville has been adapted for film which is now available on Netflix.