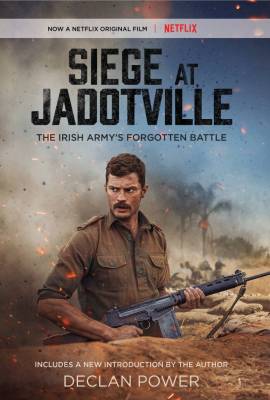 Siege at Jadotville is Declan Power’s acclaimed book on the men of A Company, 35th Battalion of the Defence Forces, who were deployed to protect the inhabitants of the village of Jadotville in the Congo in 1961.

Days after their deployment, A Company found themselves out-numbered and engaged in a pitched battle with native Congolese soldiers led by white mercenary officers. In addition to the overwhelming odds, A Company also had to contend with being strafed by a jet with no anti-aircraft defences to defend themselves.

Appeals for re-supply from UN forces went unheard. A number of attempts by Irish troops deployed in the vicinity failed. After firing their last round of ammunition and engaging in hand-to-hand-combat, Comdt Patrick Quinlan decided against the needless death of his men and ordered them to surrender.

Siege at Jadotville has been adapted for film, staring Jamie Dornan, which is now available to watch on Netflix.