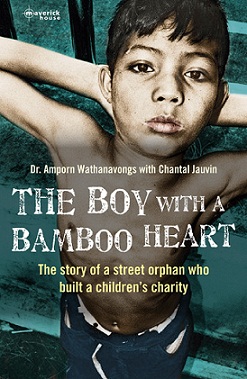 The Boy With A Bamboo Heart

The story of a street orphan who built a children's charity

With the exotic landscape of Thailand as a backdrop, The Boy with A Bamboo Heart tells the story of one man’s quest for happiness.

Orphaned at the age of five in a rural Thai village, Lek is thrust into a life-long struggle to find his place in the world. Alone and impoverished, he treads a precarious path, barely surviving in the markets of Surin until, at age fifteen, he finds himself brandishing a rifle as a boy soldier in the Cambodian jungle.

Despair leads him to two suicide attempts. He is hell-bent on succeeding on his third try, but a stranger intervenes and offers him hope. Thus begins Lek’s journey to become Dr. Amporn Wathanavongs, foster father to more than 50,000 Thai children.

Driven to become a reputable member of society, he returns to his boyhood village to study at the local temple. But when his vows as a monk collide with his desire to learn English and have a family, he must choose between settling for a safe and predictable life, or risk living as a vagrant on the streets of Bangkok while searching for a way to make his dream a reality.

Through the generous support of a Jesuit missionary working in Thailand, he achieves his objectives. But having a family, a formal education, and a respectable job in social work are not enough. He perseveres and finds his true calling―helping others.

"Dr Amporn’s remarkable story is not aboutchildhood survival or war-time battles, rather a life-long struggle to defeat his demons and transform his fate”

While the very first few chapters of this book will have you on the edge of tears, what unravels is a gripping cycle of misery, hope and inspiration that has you willing for a triumphant ending. It is in all essence a true reflection of human resolve, hope and the simple will to survive.