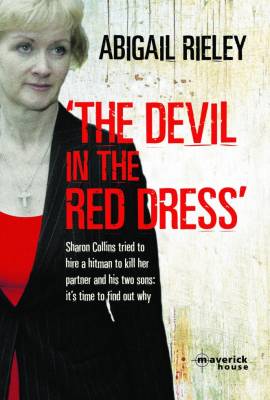 The Devil in the Red Dress

This is one of the most bizarre stories to ever appear before an Irish court.

Ireland has been gripped by the story of a housewife from County Clare who, when her millionaire partner refused to marry her, googled a hitman and arranged to have him killed.

Over the course of almost two months, the story of Lyingeyes and Hire_hitman unfolded in a flurry of emails. The website, hitmanforhire.net might have looked amateurish and carried a disclaimer but it attracted serious interest.

One person who was interested was Sharon Collins, the ‘devil in the red dress’. Desperate to get her hands on a share of her partner’s fortune, she took drastic action. She turned to Google to solve her problem. A Mexican marriage certificate was obtained but wasn’t enough. On 8 August 2006, she contacted hitmanforhire.net and started to arrange the hit.

Filled with intrigue, betrayal, sex, money and would-be murder, it has all the ingredients for a best-selling thriller. The Devil in the Red Dress will prove to its readers that truth is, indeed, stranger than fiction.